Or, if your cold email does get to my inbox, welcome to my delete button, block button, and, if I’m feeling particularly salty, my black-list button.

Well, that’s the reality for most cold emails.

Usually, the best case scenario is that you don’t get blocked. But you also don’t get a response.

The worst case scenario is either an unfriendly email or a click of the “send-to-spam” button.

I guess that’s why they call it “cold.” After all, everyone hates being cold.

Here’s an example from SalesBuzz of a cold email that is all too familiar and far too annoying.

Okay. That was painful to read. You can look away.

And it’s not just the SalesBuzz author that is receiving ineffective cold emails. A writer for Fast Company ran an experiment where he sent this email to 1,000 C-level business people. 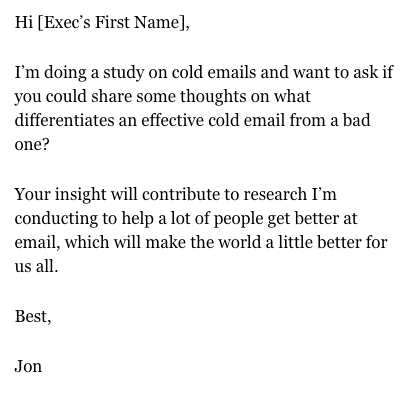 Want to know the result?

A 1.7% reply rate, which, after accounting for bounces, totaled a whopping 12 people.

So you can avoid the same fate of cold emails like this, let’s make this whole process black and white. Here are nine science-backed templates & formulas you can use to craft your cold emails.

If you’re cold-emailing people, then you have something to pitch them. This formula is about getting that pitch over with and then giving them a secondary option if they’re not ready for your high-commitment offer.

And yes, jumping on a phone call qualifies as high-commitment.

Here’s an example of how this works from HubSpot. 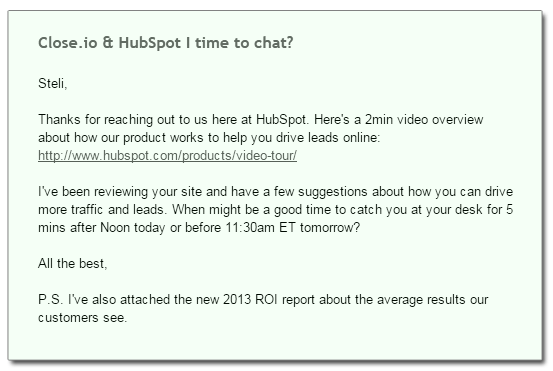 There are a few things I love about this email and the formula behind it. First, it thanks the person for reaching out and offers a free piece of content.

Then, the main pitch. The salesperson wants to connect to discuss some possible upgrades Steli can make to his website.

While the salesperson probably does have some legitimate suggestions — at least, they’d better — they also want to use that phone call as an opportunity to upsell the customer.

But, realizing that the receiver of the email probably knows that and is thus unlikely to accept that offer, they end with a quick drop that softens the blow of the pitch:

And then they run, hoping the prospect follows.

Formula #2 – The short, sweet, and simple

When in doubt, stop talking.

It’s far better to send an email that quickly tells the prospect what you have to offer and how it might be able to help them than it is to send long blocks of babbling text.

Yesware offers this example of a short and simple cold-email pitch. 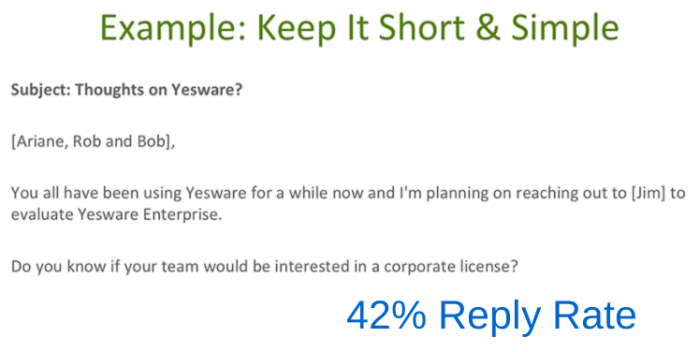 As you can see, this email received a shocking 42% reply rate. That’s a big number for any email campaign, and particularly in the world of cold emailing.

And it’s no surprise. One study found a direct correlation between the length of the email and the response rate. 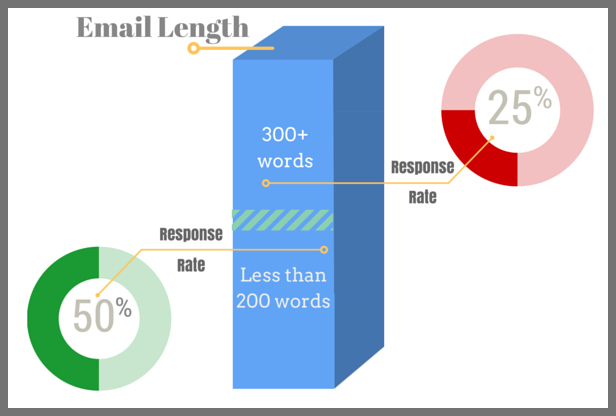 If you find yourself writing an email longer than 200 words, it’s probably best to cut it down. Get rid of any adverbs, unimportant information, or cute anecdotes.

Just get to the point, get there fast, and try not to break anything.

It’s no secret that personalization encourages engagement from customers. But it can do the same for your list of prospects.

In fact, the fastest way to turn a cold email into a warm email is by adding small personal elements. 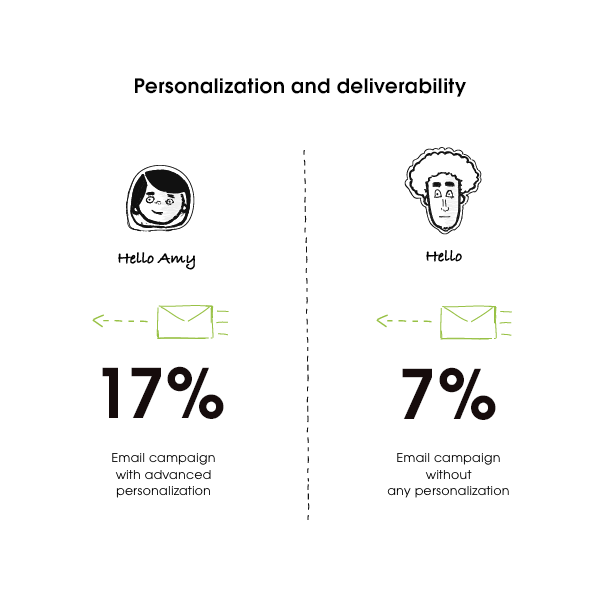 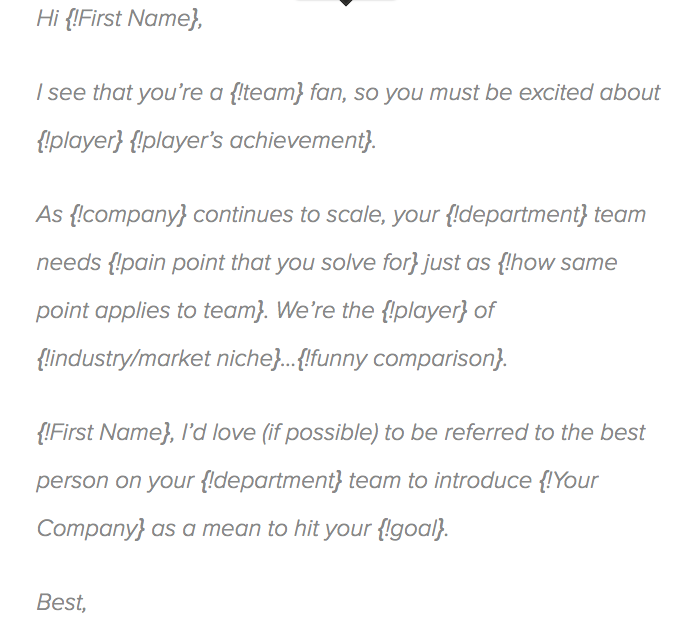 Like playing Mad Libs, you can insert the information that is relevant to your business and your pitch and create a far more personalized cold email than you would have otherwise.

Doing this communicates to the prospect that you care enough about them and their business to write an email that’s actually meant for them — rather than shotgun blasting a general email to a plethora of prospects.

But you don’t need to make your personalization as intricate as the previous example. You can keep it simple with a template like this. 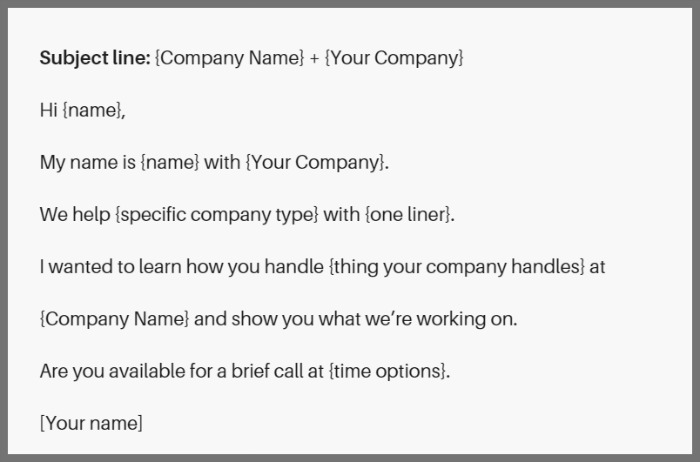 However you do it, you can personalize your email for a higher response rate.

When prospects can tell that you care about them and their business, they’re more likely to care about you and what you have to say — or pitch.

A common marketing tactic is to emphasize the pain of someone’s situation before providing them with your solution.

That way, they’ll remember the problem they’re suffering and be more likely to listen to your offer.

You can also use this tactic in your cold emails.

Just try not to over exaggerate their pain to a nonsensical extent. Do something subtle, like this. 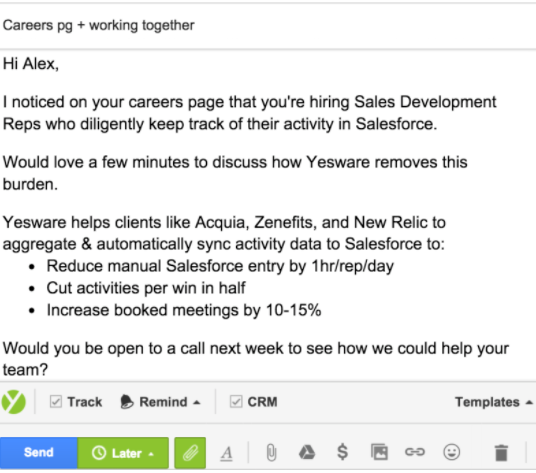 Start with personalization, explain the pain that the prospect is experiencing, then turn to your solution and a pitch for what the prospect can do next if they’re interested.

In other words, put your prospect in pain and then offer them a bandage.

All of your cold emails should be respectful.

Even if people don’t respond, at least with a respectful email, they won’t report you to their spam inbox.

It’s only the disrespectful emails that get blacklisted and annoy prospects.

But what is disrespectful?

And if it’s viewed that way by the receiver of the email, that’s all that matters.

To mitigate the possibility of harming a relationship with your potential client, send an email that acknowledges the fact that your prospect is busy.

Since this email is courteous of the prospect’s time and offers an easy way to communicate further, it’s more likely to receive a response.

If you send cold emails that assume people are going to meet with you for no other reason than you emailed them, that works wonders for killing prospect relationships.

So keep it courteous.

Sometimes, it’s best to cut right to the chase. When your prospects receive an email, they know you want something.

There’s no reason to jabber on about other stuff you think might help land the sale. What do you have to offer, why are you offering it, and what can the prospect do if they’re interested?

Simply answer those three questions in your cold email. 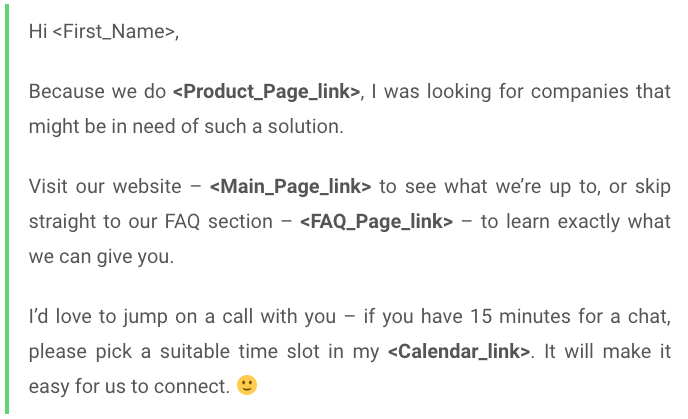 This is a good when-in-doubt strategy. If the email isn’t coming together quite right, break it down to its most basic form, clean it up, and send it.

When it comes to cold emails, simplicity is often best.

Everyone loves to talk about themselves.

A great sales tactic is to tell people that you’d like to learn more about them — that you recently saw something that they did and you’re interested in how they accomplished it.

Basically, you want to flatter them and give them an opportunity to hop on a phone call and discuss how awesome they are.

Few people will be able to pass up this opportunity.

Now, I’m not saying that you should tell them you’re curious about their business, jump on the phone, and immediately pitch them all of your products.

That would be rude and, more importantly, it wouldn’t sell anything.

Instead, you should actually listen to what they have to say, show genuine interest in the discussion, and focus the conversation on building a relationship instead of making a sale.

After all, relationships fuel sales, not heavy-handed pitches.

Give the prospect an opportunity to talk about themselves, and they’ll likely respond, excited to oblige.

If there’s one person that prospects will always want to work with, it’s the salesperson who goes above and beyond — the one who offers a free resource or piece of advice.

And here’s the more important part: these salespeople don’t require that you hop on a phone call to claim your gift. They offer it, free of charge.

Well, the opposite is true. Generally, the more free content you give away, the more prospects who will respond and the more clients you’ll gain.

Content marketing is built on this belief, and it works wonders.

To illustrate this further, check out this email pitch that Ginny Menio from HubSpot considers to be the best one she’s ever received. 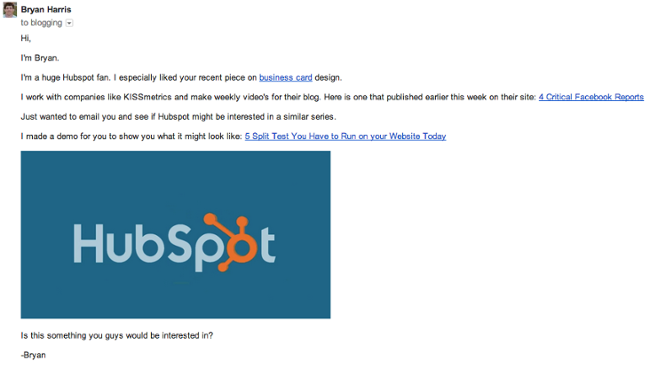 Why does she love it?

Because of the massive amount of work that Bryan put into the video he made. She writes,

“From the screenshot above, It’s not evident how much work Bryan put into this pitch. Let me fill you in: He created a custom, minute-long sample for us of the type of video he’d created… That’s not easy — it’s not like whipping up 500 words on a topic. You’ve got to write the script, shoot the video, edit it, and upload it. That’s a lot of effort for potentially zero payoff.”

And, incredibly, that extra risk on Bryan’s part landed him a gig with HubSpot.

Discussing his theory behind this cold-emailing method, Bryan said,

“It’s just like interacting with your neighbor across the street. If one day I asked her for an egg, she’d come running. It’s basic human behavior. If you give someone something, they’ll want to give you something back.”

Which perfectly illustrates the science behind the above-and-beyond formula.

As a salesperson, it’s always a good idea to add value to the prospect’s life before asking for anything in return.

Let me give you an example of how you can do this without being pushy.

My favorite car salesperson calls me about every six months. He calls me on my birthday to wish me a good day, and he called me when my daughter was born to ask how things were going.

You know what he doesn’t do?

He never asks if I need a car or if I need anything from him. He just treats me like an old friend.

And I absolutely love it.

One thing’s for sure: when I finally do want to buy a car, I know the guy I’ll be going to.

This is an email that does a great job of leveraging that same sales tactic. 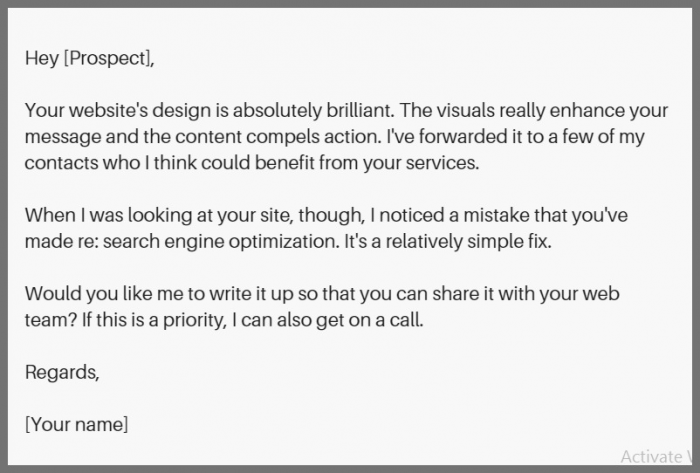 The more that you treat your prospect like a close friend, the more that they’ll feel connected with you and be more likely to respond to your email.

One of the quickest ways to make a cold email warm is by treating it like you’re talking to a friend instead of a stranger.

But, if you do it right, you can turn those hated cold emails into something more meaningful — a message that generates leads, builds relationships with prospects, and offers something before it takes. Check out these additional email marketing tips for inspiration.

You can use these nine formulas to turn your cold emails warm and land more sales than you otherwise could.
ADD_THIS_TEXT